We’re going on Summer Break for the month of August.  The continued heat and humidity do not encourage reading and discussion of family history.  Instead it is a time to live through each day as leisurely as possible.  It’s also a time to dream away the hot days.  An afternoon nap after a swim or cool shower is a good way to pass the hottest hours in the afternoon.

During this Summer Break we’ll post photos of travels, day trips or staycation activities.  There may also be photos from our family album along with some pleasant memories to share.  The content of our postings will be more visual and not require much on the part of our readers.  We hope they will provide a few minutes of escape from the heat and a prompt to remember pleasant vacation  and summertime memories from your own family life and travels.

Uncle Sammy and Aunt Kathie are currently on a tour of Italy.  Here are some of the photos of the places visited in the last 10 days.

The nave of St. Peter’s Basilica. 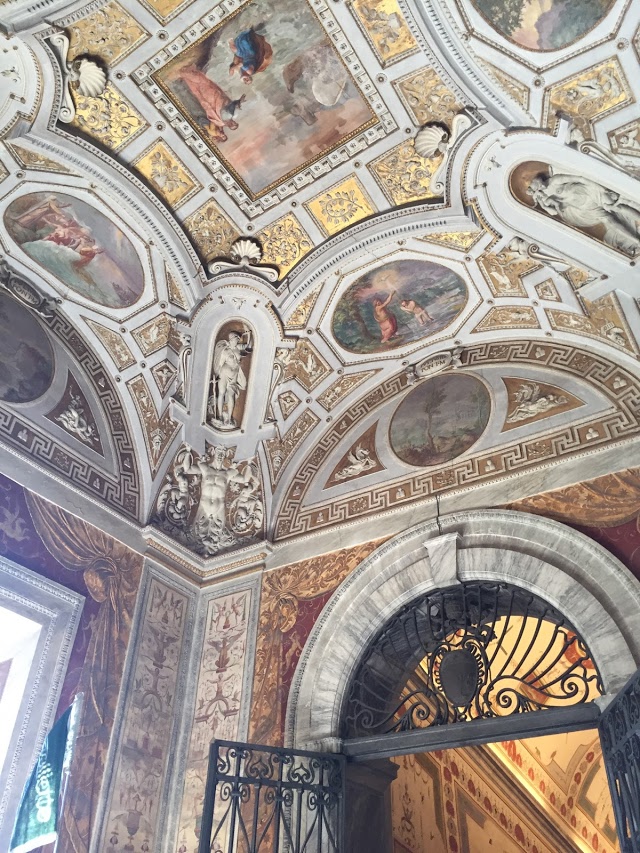 END_OF_DOCUMENT_TOKEN_TO_BE_REPLACED

This week I’ve had the pleasure of working with Claudia Lane Muro on creating a page for this blog.  Claudia is the wife of Robert Muro.  He is a grandson of Nick and Letizia Muro and the nephew of my late Grandma Josie.

Claudia has been very helpful in filling in the blanks for information on the Muro family when I first started researching my maternal line.  She has written a very heartfelt and lovely piece about what she has learned about life in an Italian-American family setting.

Robert’s parents, Peter and Angie (nee Carola) Muro will be featured in a series of postings later in 2016-early 2017 as we continue the story about the lives of the second generation of the Muro family in America.  Please visit Claudia and Robert’s page for a photo and the memories Claudia so kindly shared with us.

Letizia and Nick Muro’s first daughter, Josie, was born in Agropoli in 1909. Five more children were born in America in the period 1913 to 1920. Of the six children five received a public school education and graduated from 8th grade.

This week we focused on the topic of education as covered by newspapers in Pittsburgh, Philadelphia and several smaller towns during the period 1912-1920. We still cannot locate digitized versions of The Wilmerding Times at the Library of Congress or elsewhere. However, the search results we have give us a good overview of the influences that were at work in shaping the education a child received at school and through community activities and campaigns.

In the October 16th, 1912 edition of The Citizen, A.R. Winship, Editor of the Journal of Education, analyzes the misinformation and faulty statistics used in an article featured in the August 1912 issue of The Ladies Home Journal.

The Journal’s article claimed that the public schools are a great failure and that very few children graduate and go on to high school. Even fewer graduate high school and attend college. Private schools were praised as the one place where students made progress towards graduation and entry to college. According to the Journal’s writer most children want to leave the public schools at 14 years of age because the education they received was unsatisfying.

1915: Plea for Girls to receive a worthwhile education 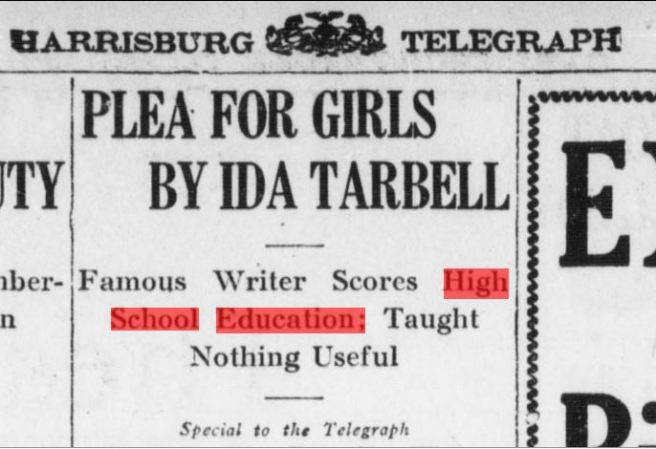 “Plea for Girls by Ida Tarbell” as the heading appeared in the Harrisburg Telegraph.

The Harrisburg Telegraph’s December 29, 1915 edition reported that author Ida Tarbell spoke at the 66th annual Convention of the Pennsylvania State Educational Association on December 28, 1915. The title of her address was “Give the Girl a Chance.” High school girls, Miss Tarbell stated, were ill prepared for the responsibilities of life and the running of a household. She thought that a girl who was already working in a factory had more life experience and a practical outlook that would make her a better wife than the girl who graduated high school. She did not state it outright but her comments point to the lack of serious attention given to teaching girls the value of money and the virtues of using it prudently.

END_OF_DOCUMENT_TOKEN_TO_BE_REPLACED

Letizia Scotti, the wife of Nick Muro, immigrated with their daughter Josie from Italy to America in the Summer of 1912. They arrived in New York and travelled to Wilmerding, company town in Pennsylvania where Nick was working and had a place to live. Our research has located Nick’s naturalization and WWI draft registration records. These discoveries broaden our picture of Nick’s life before Letizia and Josie joined him in America. They also cause us to reconsider earlier conclusions. The great changes that took place during and after WWI created a world for their daughter Josie that was radically different from the world they had known before the War.

Cover page of Petition for Naturalization for Nick (Nicola)Muro.

In posting 28a-Nicola Muro-From Agropoli to New York we presented the first documentation we had for Nick in the United States. It was the passenger list for the Citta di Napoli on which Nick sailed from Agropoli to New York in 1901. When that posting was prepared we had not located his Petition for Naturalization. We thought it possible that Nicola came over as a Bird of Passage. Perhaps he started in that manner but the Petition of Naturalization makes his movements and status in the United States much clearer.