The chart of descent for the D’Agosto family, available at ImaginesMaiorum, Ancetors from Campania, was used to provide information about the date of Giuseppe D’Agosto’s marriage. We thank Anthony Vermandois for making the results of his genealogical research available at his website. 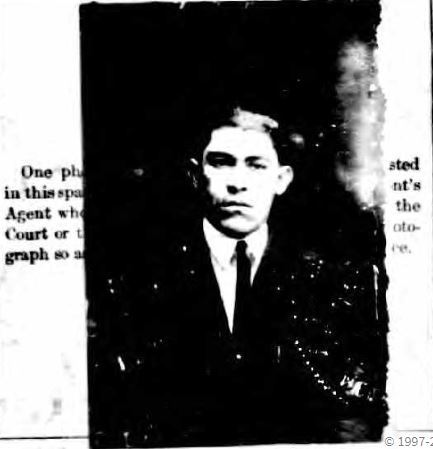 Close-up of Giuseppe D’Agosto’s photo affixed to the application for a passport in 1923.

Giuseppe D’Agosto is related to Uncle Sammy and me by marriage. He was the husband of Filomena Serrapede D’Agosto. Filomena was the elder sister of Sabato Serrapede who was Sammy’s Dad and EmilyAnn’s maternal Grandfather. This makes Giuseppe and Filomena D’Agosto:

In this posting we share the discovery the 1920 Federal Census brought us once we learned who Giuseppe was working for. Of all the relatives we’ve studied so far he is the first we know of who became a civil service employee. He achieved much and went far in the 7 years after he came to the United States in 1913.

What was the DSC?

Close-up of 1920 Federal Census entry for the Gibaldi family.

At the time the 1920 Federal Census was taken, Giuseppe was 25 years old, single and living as a boarder in a tenement located at 133 White Street. This neighborhood is located in Lower Manhattan near Little Italy and Chinatown. Giuseppe lived as a boarder with the Gibaldi family. There was a total of eight people living in the apartment. Mr. Gibaldi owned his own bakery.

Giuseppe’s employer is entered as what appears to be “DSC” in the 1920 Federal Census.

Close-ups of entry for Giuseppe in the 1940 Census. Here the “Sanitation Dept.” is entered as his employer.

We do not know if Giuseppe was guided to enter civil service on the advice of a paesano or relative. We also do not know if civil service exams were required when he became a city employee. However, the information provided by his passport application and the 1920 Federal Census points to a direction which Giuseppe carefully prepared for. As such his planning made it possible for him to achieve gradual improvements in his lifestyle over the first seven years of his time in America. 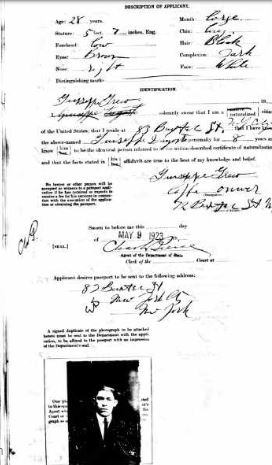 Application by Giuseppe D’Agosto for a passport in 1923.

According to his passport application, Giuseppe lived continuously in the United States for 10 years after his arrival in 1913. He wanted the passport so he could return to Italy for 6 months. Giuseppe stated on the application that on June 5, 1923 he planned to sail from New York to Agropoli aboard the Columbia. Another plus to finding the application is that it includes the photo Giuseppe had taken for the passport.

The purpose of Giuseppe’s plan

The information gathered from the Index for the Nauralization Application, the passport application and the 1920 Federal Census show us that after 10 years Giuseppe was now prepared for the next phase of his life as an American. On July 28, 1923 Giuseppe married Filomena Serrapede in Agropoli. They next appear in the 1925 New York State Census. It took Giuseppe 10 years to begin the next phase of his life in America but he made great progress during that time. As a civil servant he had a steady job. The union membership and the benefits it brings were not part of the job when Giuseppe worked as a City employee. The progress toward unionization and collective bargaining did not take place until the late 1940s and throughout the 1950s. In his personal life, Giuseppe continued to make progress. We will look at the developments Giuseppe, Filomena and the family made in the next three postings.

We had planned to discuss the role Italian immigrants and second generation Italian-Americans played in New York City’s Civil Service, in particular within the New York City Department of Sanitation. But we were not able to locate any material on this subject. Also, we could not find any writings about what it was like for an Italian immigrant to work in the Department of Sanitation during the period 1920-1940. We did find many blog postings and essays about the plight of the Italian immigrant forced to work as a rag picker during the late 19th-early 20th centuries. Along with this topic there were many articles about how members of Italian-American mob families became involved in the private waste management business. Uncle Sammy and I decided to go with the flow and review this material. We think that Giuseppe D’Agosto’s achievements as a family man and citizen may be deduced from the information contained in the 1930 and 1940 Federal Census. This discussion will be taken up in the next posting.

“Home of an Italian Ragpicker”
The bundle on the woman’s lap is her infant.

The article “Italian Immigrant ‘Haves’ and ‘Have-nots’” at Candida Martinelli’s Italophile Site contains a brief entry about Italian immigrants who came to New York City through the Padrone System in the late 19th and early 20th centuries. The Padrones were Italian middlemen who promised immigrants work in America that paid high wages. The unknowing immigrant learned upon his arrival that he was now indebted to the Padrone who helped pay his passage and secure his employment. Shock set in when the immigrant realized he was not going to get the high wages promised by the Padrone. Desperate Italian immigrants took on additional work as rag pickers in the dumps throughout the city. Those involved in this work often lived in make-shift shacks near or on the dumps because it was cheaper than renting lodgings in a tenement. Eventually the Padrones developed relationships with the companies that bought the waste material gathered by the rag pickers. In this way the immigrant who was indebted to the Padrone saw a portion of his wages once more go towards payment of the debt he owned the Padrone.

Many of the ragpickers were illiterate in Italian and came here with little or no knowledge of English. They had blindly trusted the Padrone to make everything work out for them.

In the mid-20th century, New York City used to provide waste removal services for private businesses but eventually gave the work to contractors. It was not long before members of the Italian-American organized crime families moved into the private waste management business. Many of these businesses were used for money laundering purposes. Although there were many such businesses in Dyker Heights and Bay Ridge when I was growing up you would never suspect that any such activities were underway. When it came to the communities where they lived the members of organized crime were very discreet and did nothing to draw attention to themselves or their families.

Uncle Sammy and I discussed the manner in which certain types of work become associated with newly established immigrant communities after they settle in America. We think that it is not always the case that the immigrant group came to America to work in these fields. It is more driven by market demands and who can fulfill that demand. Immigrants eager to work and/or establish a business may take up the challenge to enter a high demand field because it proves lucrative. Or the choice may be out of necessity. Across the country the following immigrants are now the major providers of services and/or the owners of the businesses that provide them:

In the early 20th century the following immigrant groups provided such services or business as:

Uncle Sammy told me how Pakistani and Indian immigrants now dominate the gas station business in New Jersey. Nowadays, if you’re in New Jersey you’ll be greeted by someone from these immigrant communities who will put the pump into the tank.

Although this discussion was informal and does not reference any studies, we think it provides something to think on when we want to reflect on the contributions immigrants make to our economy when they establish themselves here as workers, businesspeople and tax payers. Without their investment of resources and labor to help fulfill current needs a question arises that we have to consider. Would recent American born and raised college graduates accept work as a gardener, nail technician or gas station attendant if they had to?

“Why is the Mob Often Tied to the Garbage Industry?”
by Matt Soniak
mental_floss
http://mentalfloss.com/article/30738/why-mob-often-tied-garbage-industry

View all posts by EmilyAnn Frances